Now We Are All Filmmakers

Take a good look at the image above.

This is a screen grab from my Instagram App.

This is where I hit the ‘search’ icon, just to see what pops up.

In fact, by my totally unscientific count, video now outnumbers still on Instagram by almost two to one.  Sometimes far more.

In the frame above, of 11 offered ‘stories’, 9 are video. Naturally, there is the all to ubiquitous cat video upper right.

Instagram began as a platform for sharing still photographs, and almost overngiht, its popularity exploded.  In 2014, according to Mary Meeker’s annual Internet Trends report, people uploaded an average of 1.8 billion digital images every single day. That’s 657 billion photosper year. Another way to think about it: Every two minutes, humans take more photos than ever existed in total 150 years ago.

And that was four years ago. By Internet standards, those numbers are positively ancient.

What drove Instagram, more than anyting else, was the advent of marrying cameras to phones. It used to be that to take a photo, you had to remember to take your camera with you. And of course, unless you were a professional photographer, you looked like an absolute geek walking around with your Nikon hanging around your neck on a strap.  As a result, most people simply did not bother.

The advent of phones that were cameras (and more properly today, cameras that also happen to be phones), changed all that forever. Now, everyone has a camera with them 24 hours a day, every day.

The other big change was that in the olden days, you were limited to 36 exposures per roll of film, and then you had to send the damend thing off to Photomat and wait a week to get the prints.  And that is what you got – a pack of prints. Try sharing those with anyone except your spouse (and not too often if you want to stay married).

The marriage of the phone and the internet meant that a) no developing and b) instand sharing with the world. Hence, the extraodinary numbers for Instagram.

Of course, professoinal photographers were pretty much driven out of business.

Well, what happend to photography is now happening to video – and fast.

This may be hard to countenance, but it is true.

And it is no bad thing.

The advent of the printing press 500 years ago meant that suddenly everyone could become a writer and a publisher.  Scribes were suddenly unemployed, as were legions of Monks.

But writers, who could write and publish things that they felt passionate about (as opposed to the scribes for hire), created the novels and the books and the newspapers that we all read (or read – past tense).

Freed from the constraints of expensive gear and complex production techniques, people are now equally liberated to begin to create videos about things for which they also have a passion.

Let us hope that it is more than cats, however.

The Future of the News Business: A Monumental Twitter Stream All in One Place

This blog will now be part of our new website at http://www.rosenblumtv.com/ for a better experience, more community interaction, and more features.  This location of the blog will no longer be updated.

Please update your links and RSS feeds – see you there! 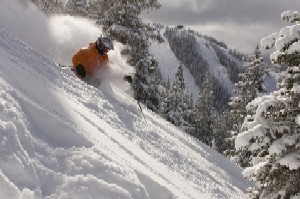 Could you go back and do that again?

My ex was a Canadian, and started skiing at the age of 3.

Her parents had a ski house in Sugarbush, Vermont.

I spent unpleasant hour after hour on the bunny slope, learning how to ski.

When you are 3 you have no fear of death. When you are 40, you can only see yourself wrapped around a tree.

Private lessons, goup lessons, frostbite.  After four hard years, I was finally starting to get it. Then, in one triumphant afternoon, I made it down my first black diamond run!  Success!  I was so delighted, I found my ex and told her what I had just done.  I black diamond!

I told her the name.

You can see why I filed for divorce.

Thus, it was with some trepedation that we signed a deal with Vail Resorts to start running Travel Channel Academies in conjunction with ski vacations.

March 7-10 we’re going to be running our first Snow Video Bootcamp at the world famous Keystone Resort in Vail Colorado.

This will be great. What better combination than skiing and video making. And evenings around the fire for our famous group screenings.

This is only the first in series of new locations and franchises for the Academy. We’ll be posting lots of other exciting partnerships and locations as we take TCA into the world.

Meanwhile, I had a pair of custom fitted ski boots made a few years ago. The kind where the blow foam into the boot and shape it for your own foot.  Unfortunately, I left these at the Sugarbush ski house.

If anyone runs across my ex, maybe you could ask her for the boots?

Welcome to the Video Revolution

call now. operators are standing by…

The Travel Channel Academy is a great course, but its also expensive.

But what we do have is a lot of folks who would like to get a sense of what this ‘video revolution’ is all about without having to spend four days in intensive bootcamp-like training.

So we’re going to do just that.

In partnership with the City University Graduate School of Journalism, Jeff Jarvis and I are going to offer a 1-day course on the basics of the video revolution.

Learn and see what it’s all about.

Rosenblumtv
Create a free website or blog at WordPress.com.